Direct Recovery Associates is a California-based debt collection agency with more than 20 years of experience collecting outstanding accounts here in California, dealing with interstate collections across the United States, and even collecting internationally in countries all over the world.

As any good business owner knows, your attention and effort is always going to be best spent focusing on nurturing and growing your actual business. However, many small and medium-sized businesses are finding themselves devoting more time and resources than they would like on collecting outstanding debts from delinquent clients.

While collecting those outstanding balances from clients is essential to keeping your business running smoothly, imagine how much better your operations could be if you didn’t have to worry about cash flow issues due to delinquent accounts.

During both good and bad economies, we have been able to help our clients address their cash flow issues by proactively managing their collections. Rather than worrying about tracking your accounts and making collection calls, we can take all of that hassle off of your hands and allow you to focus on actually running your business.

Why Use Direct Recovery Associates?

Every state has their own unique laws that govern the process of debt collection, and California has one of the most detailed lists of rules and regulations that collectors are forced to follow. In order to be sure that the agency collecting on your behalf is following all of those regulations, you want to make sure that you partner with an agency that has experience doing just that.

As a leading collection agency, we have a detailed knowledge of the laws that govern debt collection here. We also have extensive experience collecting in other states, as well as internationally. Based on our experience dealing with the strict regulations here in California, we are well equipped to follow the rules and regulations of many other states and even foreign countries.

In addition to understanding the laws that govern the collection industry in various states and foreign countries, we also have a staff that is equipped with the customer service skills to work with a wide range of personalities in a friendly manner that leads to actually getting things accomplished. We have the skills and expertise to accomplish the goals that our clients set out for us.

Partnering with a qualified debt collection agency will give you the ability to focus on the important aspects of your business, while still knowing that someone is handling your outstanding or delinquent accounts. And when you partner with someone who is able to manage your collections in a professional manner while staying in compliance with local regulations, everyone comes out better off in the end.

The overarching view that each of these pieces of legislation is trying to get across is that a consumer deserves to be protected from any type of predatory collection tactic. But each does so in a slightly different manner, so let’s dive into some of the important details of each law.

The Fair Debt Collection Practices Act (FDCPA) is a federal law that applies specifically to third-party debt collectors. It states that collectors must conduct their collections through reasonable channels at reasonable times.

The FDCPA also strictly forbids intimidating collection tactics like threatening debtors, impersonating law enforcement officers, or sharing any information about an outstanding debt with a debtor’s friends, family, or co-workers.

On top of those restrictions, the FDCPA also laid the groundwork for debtors to fight back against inaccurate or downright wrong collections. It specifies that if a consumer disputes a debt in writing, the collector must cease all collection attempts until they are able to prove the debt is legitimate.

The Rosenthal Fair Debt Collection Practices Act is a state law in California that uses the FDCPA as a starting point and builds in additional protections for the consumers here in The Golden State.

One of the key elements set forth by the Rosenthal Act is that it applies all of the restrictions of the FDCPA to original creditors as well as third-party debt collectors. That means that anyone attempting to collect any type of debt here in California must follow the regulations, regardless of where the debt originated.

In addition to extending the definition of a “debt collector,” the Rosenthal Act also requires anyone attempting to collect a debt to identify themselves as a debt collector at the beginning of the initial correspondence and then follow up in writing within a specific time period.

While the FDCPA and Rosenthal Act were both designed to protect consumers, they aren’t necessarily viewed as a negative by legitimate debt collection agencies either.

Most of the rules and regulations specified by these laws boil down to treating consumers with dignity and respect, which also happens to be one of the best ways to be successful in any debt collection effort. Therefore, any decent debt collection agency will already be following these regulations anyway.

If a debt collector has to resort to breaking any aspect of the FDCPA or the Rosenthal Act, there is a good chance that they weren’t going to be successful in their collection effort in the first place.

With all of that in mind, we can see that treating the people you interact with respectably is the best way to turn a profit in any industry, including commercial debt collection.

Collection situations that are entirely based here in California are relatively easy to understand, but those same cases can get infinitely more complicated when we start talking about collecting across state lines.

If the debtor or the collection agency is located in a different state, the rules of more than one jurisdiction come into play. In most cases, everyone involved is best served to follow the laws of the more strict location with respect to any collection efforts.

And if you think that interstate collections sound intimidating, things get kicked up to another level when we are forced to deal with international collections. Once again, the best policy is to understand the rules of every location involved and attempt to follow the most strict versions if there are any discrepancies.

Debt Collection with Dignity and Respect

In most cases, the statute of limitations for outstanding debt in California is four years, which is one of the shortest periods of time across the country. In fact, only six states have shorter statutes of limitations than California.

It is also important to remember that any effort a consumer makes in the form of a partial payment is a valid reason to restart the clock on any statute of limitations arguments. 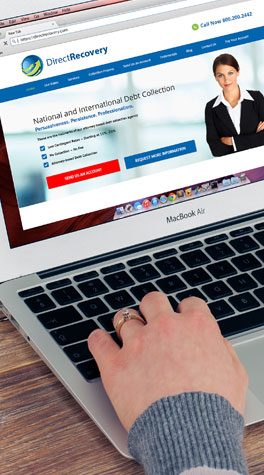 Are you Ready to Take the First Step?

SEND US AN ACCOUNT
Page load link
Go to Top